So, you’ve weighed up the benefits and decided a concrete tank will be a worthwhile investment. But which one to go for – and what’s the difference between concrete tanks poured on site versus precast concrete tanks?

Read on for more… 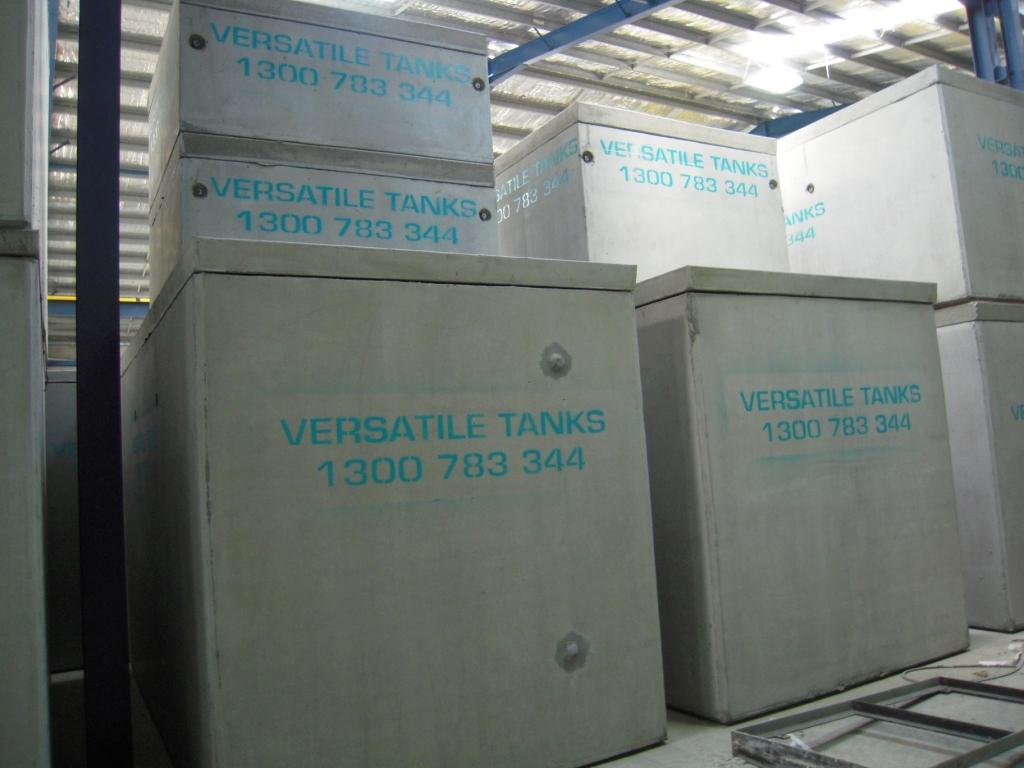 Why are precast concrete tanks a good option for your site? The bottom line is they could well prove safer. Why? Precast tanks ensure site excavation is never open for long periods of time, therefore reducing the risk of accidents to both site workers and the visiting public.

What’s more, the hole for the tank can be dug out the day prior to the installation. This means the site isn’t exposed for too long, and therefore isn’t under threat of collapsing, due to changes in the climate, like extreme rainfall.

If you’re looking to keep your costs as low as possible, you’ll also be pleased to discover that the installation of a precast concrete doesn’t require there to be lots of staff on hand, where a concrete tank poured on site might. Instead, installation is quick and straightforward.

Built in a controlled environment in a factory setting, precast tanks aren’t affected by the weather. This means that all reinforcing stays where it is supposed to, ensuring optimum quality control for you – the client. On top of this, the concrete can be poured at any time of the day, which also helps in terms of quality.

Anyone looking to go down the route of having a concrete tank built on site may find that they come up against some restrictions, too. The weather, the use of tower cranes or even accessibility for deliveries can pose an issue and therefore mean it is more difficult for your installation to take place. None of these factors would be an issue with a pre-cast concrete tank.

Pre-cast tanks, on the other hand, are in quick supply and prove more reliable. They also offer more strength and are longer-lasting in general.

So, where can pre-cast concrete fire tanks be installed?

Pre-cast concrete tanks can be incorporated into your house drawings and plans – and they’re tested regularly for strength and reliability to ensure you get the most from your money.

Made in a factory in a special, seamless mould, pre-cast fire tanks outperform concrete tanks poured on site in a whole host of areas. There are no leaks and that’s because they’ve been manufactured carefully off-site. This also makes them easier to install – and anyone from plumbers to excavators and builders can use them.

Underground water tanks like those we offer here at Versatile Tanks are ideal for restricted site applications, simply because they’re designed to be modular and to sit tightly next to each other.

They can handle large loads, too – and it’s all thanks to their design. Made to be buried underground or installed as a patio, driveaway or garage, they’re hugely versatile. If that wasn’t enough, they can be customized to each of our customer’s unique requirements.

What about the process?

Site preparation is key to the installation of your pre-cast tank – and it’s something which can be overlooked with a concrete tank poured on site, on the day.

The base of the tank needs to be flat and usually it is laser-levelled first, with around 150ml of compacted road base and no fill. It’s important that the foundation on which your tank will stand is of uniform thickness; this is simply due to the immense weight and size of your pre-cast tank.

It’s vital that the ground it’ll be installed on can bear a pressure of 100 kPA – and there needs to be plenty of room around the base of the tank, too. This will help when it comes to laying out the formwork, before building up the scaffolding required to support a structure of this size.

Supplied in ‘flat pack’ form, pre-cast tanks come with a convenient concrete cover which tends to be solid or slatted to ensure surface liquid can flow within it easily. Holding up to 10m3 via its single modular tank, pre-cast tanks can be used for recycling, filtration, storm water and the storage of clean water.

Tanks which are poured on site come with concrete tops which are supported by load-bearing columns. These tend to be poured at the same time as the roof, which enhances the strength of the tank for a longer-lasting construction.

Concrete tanks poured on site can be incredibly versatile, since on-site concrete pouring is custom to the build. That said, they can be time intensive – on top of that, they can cost more.

Pre-cast concrete, on the other hand, can be more affordable and offers greater longevity. It’s for this reason that many home and business owners opt for a pre-cast tank. According to trade magazine, the Concrete Producer, the demand for precast concrete is on the rise in America alone – and with more and more home and business owners in Australia choosing to invest in a concrete tank, it’s clear why most go for the affordable option.

But for its few disadvantages, pre-cast concrete offers many advantages – as we’ve discussed. More efficiently manufactured, factory-cast concrete can help businesses drive down costs and the reason is that it can be moulded using assembly line techniques. Its versatility also makes it an appealing option for businesses, given that the client can choose from a large variety of finishes.

It’s also much easier to control the quality of pre-cast concrete, given that it is pre-mixed, poured and cured in a factory setting, while concrete poured on site can be subject to humidity and temperature changes or issues.

Remember: while some pre-cast concrete tanks can mean a higher initial outlay, they can look more aesthetically-pleasing than their poured on site counterpart. They’ll also save you money in the long-run, since they’ll last longer.

With pre-cast concrete, the hardening takes place before the concrete tank arrives on your site, which means fewer labour hours and a more cost-effective job.

Will you be opting for a pre-cast concrete water tank? Get in touch with the Versatile Tanks team to discuss your options. We can answer all your questions, providing a balanced view on pre-cast concrete versus concrete poured on site.