Any water that is stationary will eventually become stagnant and undrinkable. How water is stored and its temperature will determine how long the water stays healthy and drinkable.Spring water is often considered as the best water you can drink, store your water in an underground concrete tank and you are producing your own spring water.

Why tank water is so acidic 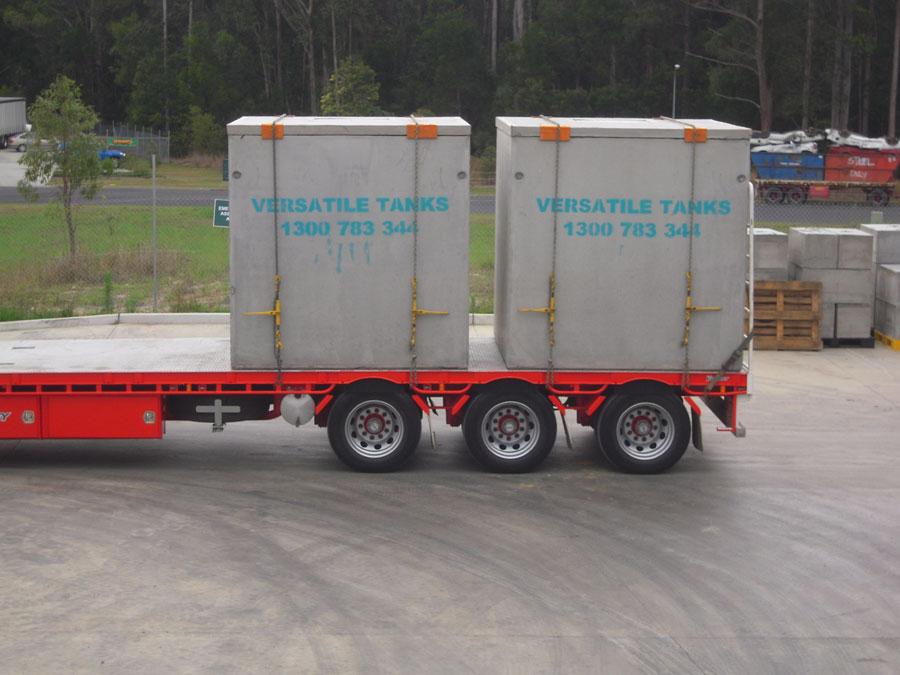 In Australia most tank water is normally roof harvested rain water, which is naturally acidic. The acidity of normal rain is attributed mainly to carbon dioxide in the atmosphere which gets absorbed as water condenses from a gas to a liquid and it is these liquid droplets that forms clouds and eventually rain. Even in areas that are minimally affected by human pollution, the pH of rain water can range from 4.5 to 5.0 which is fairly acidic.

In built-up areas around cities, above normal acid rain is generally caused by human pollution and in highly polluted cities rain water can become as acidic as lemon juice which causes lots of problems for old historic buildings.

This acidity forms part of the natural process that allows rain water, with the help of microbes found in the soil, to dissolve minerals from the soil into a colloidal form that now makes the water neutral and full of minerals which can then be taken up by plants. Acidic water is however not choosy and will happily do the same thing in the human body. Resulting in the stealing of alkalizing minerals and therefore a net loss of these vital minerals from the body as the water attempts to achieve a more neutral pH balance.

Why is concrete the best material to store water in 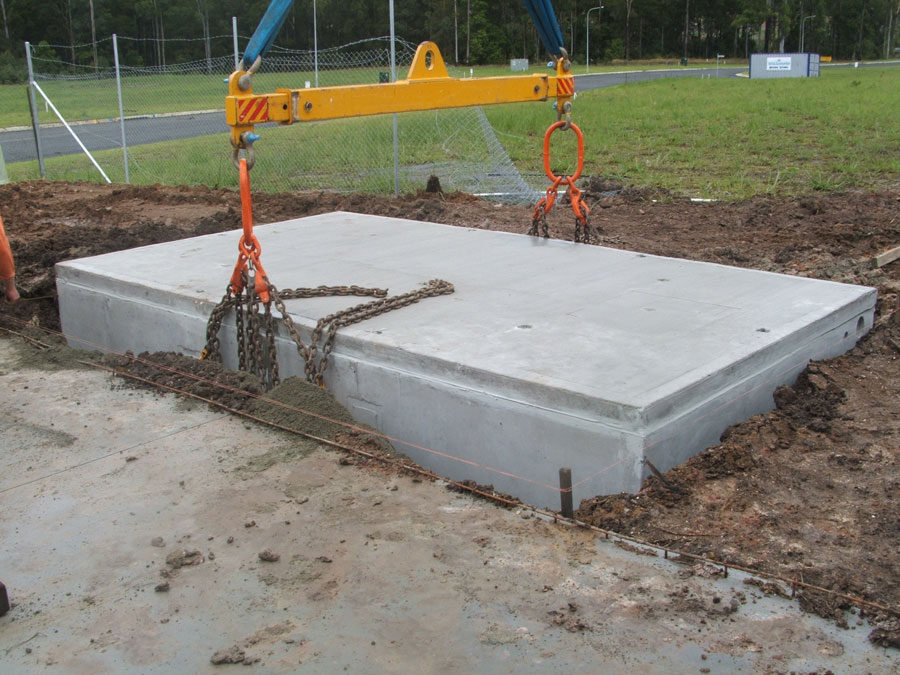 The very nature of water itself is that it wants to balance out to a neutral pH. and a concrete tank is the only man made storage system that will allow this to happen. To neutralize itself, water will absorb some of the minerals out of the concrete and will generally settle in a slightly alkaline state.

An in ground concrete water tank will keep the water at the temperature that it fell out of the sky at and if you are in an area that gets mostly winter rain, that cold water will remain cold all summer.

Even above ground, light cannot penetrate through the concrete walls of a concrete and into the water.

All of this become very important, because roof harvested rain water picks up all sorts of dust, bacteria, and bugs and even after being pre-filtered some always gets through.

Water that is alkaline, cold and removed from light will not support the growth of any bacteria that makes its way into your tank, thus allowing this water to stay clean and drinkable for years.

If you cannot put your tank underground, paint it white; or allow ivy to cover it to keep the sun off it and the water will stay very cold.

Yes in time, this leaching of minerals will compromise the integrity of a concrete tank, but a well-made tank is good for a hundred odd years.

If you are interested, you can read more about why water is important to our health

After oxygen water is the second most essential element needed by the body.  The average healthy human body is 69% water, the liver is 90% water; the brain is 85% water; blood is 83% water; the muscles are 70% water; bones are 35% water, and fats are about 25% water. Every organ in the body heavily depends on water to function correctly and we will never be truly healthy if we are not sufficiently hydrated with clean healthy water.

Water is crucial to every bodily function; the body does not have any reserves to draw on and relies on daily intake. When we become dehydrated, the body works on a priority distribution system and it instinctively begins to ration water to each vital organ.  The brain is the most important organ so it gets the most water, the skin being the least important is rationed the least amount of water. By the time the thirst mechanism in the body switches on to tell you to drink water, the body is already dehydrated. When the body is dehydrated, 66% of the water loss is from the interior of the cell, 26% is lost from extracellular fluid and 8% is lost from the blood. Stressed, dehydrated cells manifest into all sorts of health issues that are never related back to dehydration. There has been very little research into this field as there is no money for the health industry in telling us to drink more water and hence no money for research.

Stressed cells produce more acidic waste and dehydrated extracellular body fluid is not as able to remove toxic waste and so the body slowly becomes more toxic and acidic. Therefore the first line of defence against disease is a properly hydrated your body.

It is also interesting to note that, as we get older, we become less aware that we are thirsty. The reason for this is not known at this point in time, but it is seen as part of the ageing process. Our bodies were about 90% water when we are born, yet most of us will be about 50% water when we die, so the aging and dying process is largely a process of dehydration. So for long term health it is important to develop the habit of drinking at least 2 litres of water during the day, every day, whether you are thirsty or not.

Make this a lifetime habit and you give yourself a much better chance of a long healthy disease free life. Just make sure that the water you are drinking not acidic.

Types of Water and its Effects on Body Hydration

Studies have shown that the average human needs two litres of water per day for, digestion, hydrating and detoxifying cells, removing body waste and finally to offset moisture loss via the lungs from breathing and from the skin for cooling. Unfortunately many people today rely on everything but water for hydration, not realising that many additives added to water including, tea, coffee, flavourings and sugars can result in these beverages having a dehydrating or diuretic effect on the body. This trend is, no doubt, partly caused by the appalling taste of the reticulated water we are forced to consume.

Listed below are some of the types of water we commonly consume and the common beverages we use to improve the taste.

Most tap water is kept slightly alkaline with a pH level of 7.0 to 7.5, local authorities doctor it with lime to keep it slightly alkaline for two reasons; Firstly, to offset the acidifying effect of the large number of chemicals put into the water in order to kill bacteria and other microorganisms. Some of the chemicals that are routinely added to our drinking water are; Liquefied chlorine, Fluoro silicic acid, Aluminium sulphate, Calcium hydroxide, Sodium Silicofluoride. Secondly, to prevent acidic water corroding water pipes.

Chlorine is the main chemical added to reticulated water to kill any bacteria in the water. However when ingested internally, it is also a strong oxidant, that oxidises, deteriorates and ages the body.  Chlorine is also known to dry the skin and scalp causing them to flake.  It is known as a carcinogen and can also disrupt digestion by killing the probiotics (friendly bacteria) in the intestines.

Fluoride is another chemical added to water in many areas of Australia, in fact it is still being rolled out to many smaller towns and yet most European countries have discontinued adding fluoride to their water. The biggest problem with fluoride is that it is a highly toxic man-made waste by-product from a number of industries. Fluoride is a protoplasmic poison, meaning that it affects the permeability of cell membranes, which impedes the hydration and removal of waste from the cells. To give you an example of just how toxic fluoride is, the lethal dosage for the average size man is 2.5mg, compared to 400mg required for arsenic. One of the biggest problems caused by consuming sodium fluoride is that it interferes with the absorption of iodine, one of the most important minerals found in the body.  Without iodine the thyroid gland, cannot produce vital hormones that regulate growth, protein synthesis, metabolism and a host of other bodily functions. Fluoride is also linked to neurological disorders and making bones brittle, since a large percentage of ingested fluoride accumulated in the bones. You should not try hydrating yourself with 2 litres of tap water if you live in an area that adds fluoride, you will need to either purchase fluoride free bottled water, or install a filter that can remove fluoride which is very difficult and expensive, or better yet collect your own rain water that is stored in a concrete tank.

Aluminium sulphate, is added to the water supply, to settle out solid particles that are suspended in water that makes it look murky. Doesn’t matter about your health, so long as the water looks clearer and cleaner. Again, hydrating yourself with the recommended 2 litres of tape water is like adding your name to the Alzheimer’s lotto.

Can range from the very best mineral water to poorly treated tap water that still has chlorine and fluoride in it. No matter how good this water may be, it will always have the added risk of plastic contaminants leaching into the water, especially if the bottle left in the sun. Many bottled waters travel long distances in dark coloured steel containers that are sometimes parked in the sun for days, resulting in the internal temperature of those containers getting very hot which can causes the leaching of plastic contaminants into the water.

Like bottled water filters can range from doing a very good job to being an almost useless, but as usual. The old saying “you get what you pay for” is usually the correct.

Like distilled water, Reverse Osmosis Filtered water is detrimental to the health of anyone who consumes it.  It should not be consumed for three reasons: Firstly, it acidifies the body, secondly, it leaches minerals from the body and finally the large size and shape of its water molecule clusters do not hydrate the body well. Purified water is not a substance that can be found in nature.  Because of its extreme purity, purified water readily absorbs carbon dioxide from the air. This makes it acidic and even more aggressive at dissolving the alkaline substances it comes in contact with, just like tank water.  It contains little or no dissolved oxygen or colloidal minerals and therefore it should be considered “dead water” until it is re-oxygenated and re-mineralised.

Have a dehydrating and acidifying effect on the body and should not be relied on to quench a thirst or hydrate the body, even though they are primarily made up of water. Soft drinks are by far the worst and coffee and tea are also very dehydrating, especially when sugar and milk are added. Adding artificial sweeteners like aspartame creates a very toxic mix and when consumed over a long term, results in all sorts of health issues that never get linked back to these beverages. The rule of thumb is that for every cup of any of the above beverage consumed, you should drink at least one glass of water to offset it, over and above the two litres recommended for normal daily hydration of the body.